First, we’d like to know a little more about you. Tell us about your childhood.

I’m from Koshigaya, Saitama, and I grew up as the oldest of three siblings. My parents’ policy on raising children was to give us the freedom to do the things we liked, so I developed all sorts of interests. I got into soccer in elementary school. I was the team captain in high school and spent my days playing with my friends, but during one game I injured my lower back. Not only did this end my participation in competitive soccer, but I couldn’t even play as a hobby anymore. I spent half of my last year in high school stuck in an upper-body cast. I was really down about the situation. However, during this time, I became obsessed with an idol music group that was really popular at the time. Thanks to them, I found the motivation to study hard for my university entrance exam. Getting into this music group would lead me to my future career path.

I had a first choice in mind for which university I wanted to attend and what I wanted to major in. My dream since high school had been to become a politician, but I couldn’t pass the necessary exam. This led me to spend my time in college searching for a new dream.

How did you come to be interested in advertising sales?

I got a lot of experience through part-time jobs and internships in college, but it was ultimately my love of idol groups that influenced my interest in marketing and advertising. To me personally, idol groups were an energizing presence. To the broader public, however, they were a “product.” I got interested in things like how companies marketed K-pop groups to the rest of the world, for example, and decided that my job would be in the marketing and advertising industry.

I narrowed my job search to the advertising industry. I was told that the future of advertising wasn’t in mass media, but in digital advertising, so I joined a company as a media rep. There, I was in charge of selling advertising space in digital media to advertising agencies. Gradually, however, I began to realize that the effectiveness of an ad depends more on the quality of the creative than the form of media it is placed on. I also paid to attend courses on copywriting out of my own pocket. 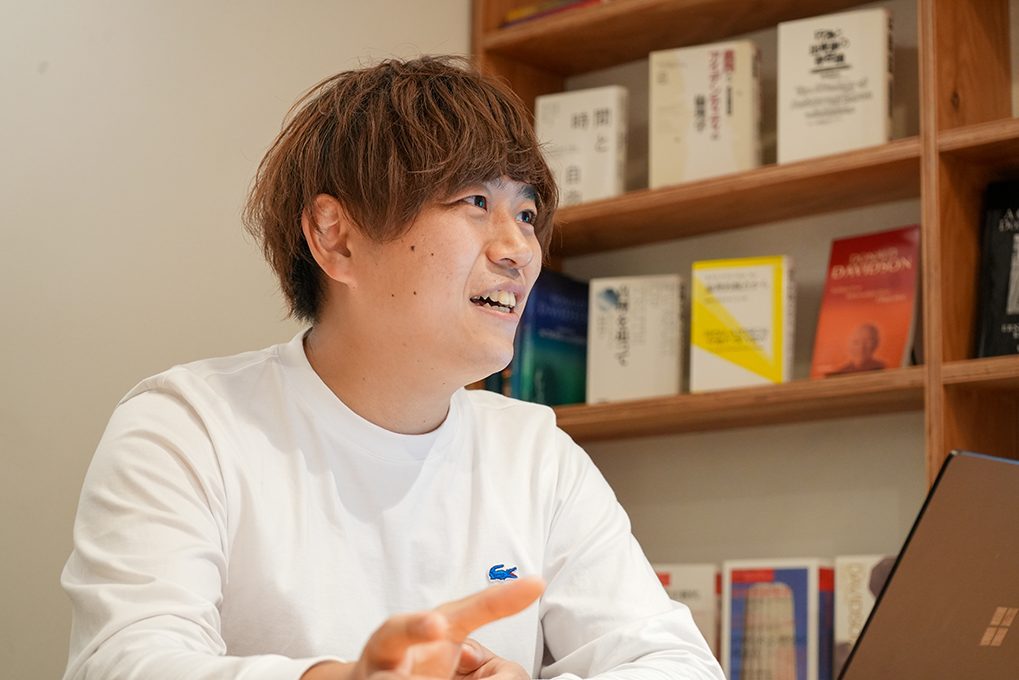 How did you first learn about SmartNews?

I was actually in charge of purchasing ad space from SmartNews when I was working as a media rep. SmartNews wasn’t as well known then as it is today, and I thought it was just another app where people could easily read the news.

Why did you think to apply for a job at SmartNews?

During my time as a media rep, I was in charge of ad networks and curated media. Media curation was in its early days, and all companies were scrambling to monetize their advertising models. The key point was to sell as many ad spaces as possible to provide working capital for media operations.

Among these platforms (though SmartNews is actually a news aggregation app), SmartNews stood out as having a user-first philosophy. The company strongly believes in providing quality, beneficial information to the user. I thought that in the future, media platforms that value their users the way SmartNews does would, in turn, be valued by those users and continue to grow over the long term.

In fact, I think I was most eloquent when I was explaining SmartNews to ad agencies. I had such an emotional attachment to SmartNews that I decided that I had no choice but to apply for a position at the company. I had only applied to Smart News, and if I hadn’t gotten a job offer from them I would have continued working at my previous job.

What impression did SmartNews’ interview process leave you with?

The process was long. I remember being surprised when I heard that I would interview with a total of eight people and that each interview would be forty-five minutes long. I met with the CEO, Ken-san, and the COO, Kaisei-san, during the last interview. When I answered their questions, they would follow up with even more questions. I remember it being a very challenging interview.

Of course, they welcomed anyone who wanted to play to their strengths and accomplishments of the past. But in addition to that, I think the interviewers went deep to find out if a candidate has a dream they want to achieve and if working at SmartNews is a way to achieve it, and if the person has a passion for making a positive contribution to the world.

Did anything about your impression of SmartNews change during the interview process?

Some of the interviewers were people I knew well from having worked with SmartNews as a client, so there were no major changes in my impression. I wasn’t disappointed.

What kind of work do you do at SmartNews?

I belong to the sales team called JP Ad Business. I work as a senior account manager and am in charge of a company that has multiple businesses and a team whose areas include VOD content, e-comics, and food delivery. My role is to listen to the advertiser’s business and product issues and contribute to solving those issues by providing SmartNews advertising as a solution.

Saying that I’m in sales might give the impression that I go out and try to sell the company’s product, but I think the phrase “digital marketing partner” is a better match for what I actually do. The actual stakeholders are not only the advertisers but also the advertising agencies. I work on getting agreements from advertisers on policies for resolving issues while collaborating with the advertising agency that will execute those solutions.

My team is a small one. All members have experience in operational advertising at advertising companies. We’re a horizontal, collaborative team where people use their individual strengths and help each other in the areas where someone might not be as strong, learning from each other to reach our goals.

In fact, I just received a call from one of my clients with an urgent request before this interview started, but I knew that one of my team members would be able to handle it. That’s why I can continue our conversation with peace of mind. What kind of impact do you think you and your team have had on SmartNews?

Simply put, we’re making sales, but I don’t think that’s the only thing. By using SmartNews as an advertising medium, we are promoting the very existence of the company. I believe that by solving advertisers’ problems, we can make them aware of the quality and convenience of the SmartNews app, which will lead to activities that increase our number of fans.

What is the most rewarding aspect of working at SmartNews?

I think anyone can sell things in an environment where the foundation has already been laid, but many things here still need to be established. Working in this sort of environment, challenging ourselves, and taking responsibility for doing what still needs to be done is an interesting part of working for SmartNews.

The company has grown rapidly over the past two years, and the JP Ad Business division has also seen a rapid increase in the number of employees. In addition to the rapidly changing environment, I often feel we do not have all the rules and tools necessary to cope with these changes. I think there are many things we can do precisely because we do not have those rules or tools. This is where I feel the company’s core value of “Be the Owner” is truly important.

Through the process of building the company’s foundation, I can acquire new skills, challenge myself with work that I previously could not do or had never done, and contribute to the company while increasing my own value. I feel this is the most rewarding aspect of working at SmartNews.

How do you feel you have grown as an individual and businessperson since joining SmartNews?

I think I’ve adopted the spirit of “Be the Owner.” I feel that after joining SmartNews, I have developed the ability to identify problems and issues through my work, involve others when solving them, and make moves that lead to solutions for the entire organization rather than just simply following directions.

I think people who can not only help their team achieve its mission but can also work to improve the organization as a whole by going the extra mile are the kind of people who will make a difference in this company in the future. 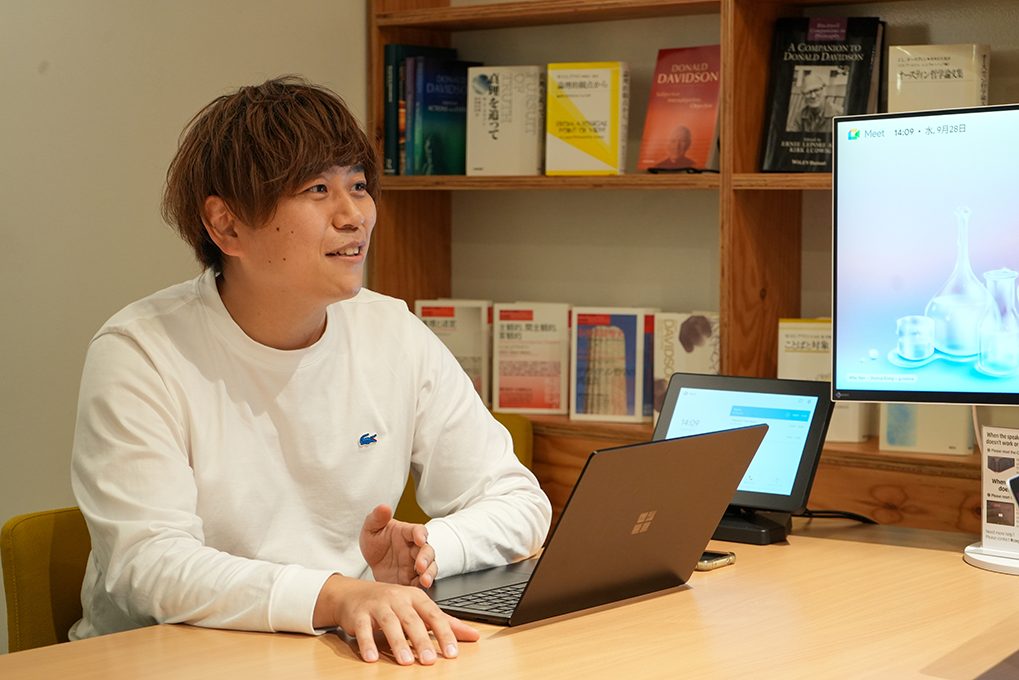 What kind of person do you think would be successful on your team?

This again goes back to the spirit of “Be the Owner,” but I think someone who can work not only on what’s assigned to them but also on other issues and problems they discover on their own would do well here. This is a little more specific, but I think someone with at least three years of experience in solving marketing issues through digital advertising and understanding the stakeholders involved in digital marketing and how to move them would be a good match.

What advice would you give to someone considering applying to SmartNews?

It’s important to prepare your reason for wanting to work at SmartNews so you can convey it clearly. I also conduct interviews now, and I recommend avoiding generic reasons that could be used for any company.

My case may be unique, but I had a positive impression of SmartNews from my time working with them as a client at my previous company, and I went into the interview thinking that I didn’t want to change jobs unless it was to work at SmartNews. The reasons candidates give for wanting to work at SmartNews don’t have to be exactly that, but I think it would be a good conversation starter if you could tell us why your new job has to be at SmartNews.

Learning to Give Through “Being The Owner”

Give and Take: A Revolutionary Approach to Success by Adam Grant explains the mindset that I still try to embody when I work, and I believe the practice of this mindset has had a positive impact on me. In short, this book says that when you give something to others, don’t do it with a mindset of getting something in return for yourself, but give with a feeling and attitude of being there for others.

Living the principle of “Be the Owner,” which I relate to and practice, is also a part of this mindset. If you focus on organizational issues with as much enthusiasm as you do on your own issues and try to be actively involved in solving them, you will be given new opportunities by the organization. You’ll also be thanked by members of the organization, be considered the right person to consult on a variety of issues, and be needed by others. This is often also a way to improve your own skills without even knowing it.

This book gave me the opportunity to see how wonderful it is to be able to increase both how I perceive my own value and how others perceive the value I can provide by continuing to give.

The contents in this article are as of January 4, 2023.
Back