Shaping the future of SmartNews through hiring

Originally from the Philippines, Dona Pardo has lived in Japan since 2015. After teaching English to students and professionals for four years, she changed careers to recruitment. She started out as an agency recruiter hiring for banking and finance roles before discovering her passion for tech and switching her focus to hiring for Japanese start-up and global e-commerce companies, specializing in Software Engineering, Product UX/UI, and Business Development. Since joining SmartNews in December 2021, she has driven Engineering/Product hiring and co-runs talent and organizational development projects.

Tell us a little bit about yourself.

I’m a Filipino by nationality, but I was lucky enough to grow up around different cultures because my mom was a diplomat and traveled for work. My brothers and I went with her everywhere she traveled. That’s why I was born overseas and lived in a few countries from ages four to ten. After that, we went back to the Philippines, and I continued the rest of my education there. My mom started traveling again when I was in high school, and I went with her to Japan. That was my first experience here, and I felt a really strong connection to the place. I enjoyed it so much that I decided I would live and work back here later.

What was it about Japan that really connected with you?

It was a combination of things. I liked the efficiency of Japan and how you can expect things to be on time. Customer service is highly valued, and people are very cordial, very respectful. It’s hard to explain, but I had this feeling of just being home even though I didn’t speak the language or look like the people around me.

The fact that I was raised overseas might be the reason why I felt I needed to be somewhere else. I wanted to be in an environment where I needed to push myself to succeed, and a foreign country is a great place for that. That felt like the thing I wanted to do.

When did you come back to Japan?

So as soon as I graduated from university, I started applying to jobs in Japan. But it wasn’t easy. I think I applied to a hundred positions on gaijin-pot, a job board for foreigners seeking jobs in Japan, in the course of a month—every month—to try and get a job here. I was applying to English teacher positions, and coming from a “non-English-speaking” country, it was very challenging.

Eventually, I found a job in Shikoku. I lived in a very small town called Annan in Tokushima Prefecture and worked as an English teacher for an eikaiwa (English conversation school), a gakudo (an afterschool service for children), and a nursery school. They were all part of the same big company.

What got you into your current career in recruitment?

The more I lived in Japan, the more I wanted to stay and expand my horizons, so I moved to Tokyo and got a job here. After that, I wanted to move into a corporate environment. I learned one of the smoothest ways to transition from working in education to working in corporate was to become a recruiter, as it’s a function that often welcomes non-native speakers of Japanese.

I first joined a boutique recruitment agency focused on finance and covered asset management-related positions, front, middle, and back office positions, and roles for some securities and insurance companies. After almost two years there, I moved to another boutique agency and also switched my industry focus to technology.

What made you want to switch from finance to tech?

Finance was interesting for a while because I’m personally interested in investments, but I could only sustain my interest for so long. I requested to join the tech team in my previous company, and I’m really glad it worked out. Once I started learning about things like how machine learning works and how technology can make so many things possible, I felt like my curiosity was endless.

Since this was another boutique agency that concentrated on very specialized fields, I only worked with two to three clients. During that time, I felt really invested in one company and became very passionate about representing them. That’s when I started to realize that representing one company, fully understanding their processes, and having face-to-face time to build trust with stakeholders like hiring managers and interviewers—those were the things I wanted to do more of, but there were limitations as to what I could do from the agency-side. So, I decided to start looking for internal TA positions.

How did you find out about SmartNews, and what made you want to apply?

I was familiar with SmartNews from hearing about it from friends that use the app and seeing job postings for open positions on places like LinkedIn. I also knew it from my previous role; working within the tech space at an agency, it was part of my job to know the market.

I applied to SmartNews because it had most of the things I was looking for: I wanted to continue working in the tech space and in Japan. SmartNews is also a startup, which was motivating for me because I knew that there would be many opportunities for growth in that kind of environment. I thought there would be a lot of things to learn. I wanted to push myself while I was still young and work hard to get exposure to how a business is built from the ground up from the perspective of recruitment and talent development.

But I didn’t join simply because of those reasons. It was the interview process that really stuck with me. I’d already interviewed with a few companies before starting the process with SmartNews, so I had a sense of what their recruitment teams were like. The first interview I had at SmartNews was with Peter Doolan, one of our tech recruiters. The interview felt more like a conversation with a colleague, which I really appreciated. It was very straightforward. I felt like he actually wanted to get to know me and not just run through a list of questions he’d prepared to see if I was a good match for the role.

Who else did you meet during the interview process?

I also met TA Manager Kazumichi (Kaz) Hamazaki, one of our Product Group Heads Takahiro Ogoshi, one of the Engineering Group Heads Kai Inokuchi, our HR Group Head, and our CSO Yi Ren.

It was a very supportive process. None of the interviews felt one-way or transactional, and I came away from them wanting to meet more people in the company. I was curious to know if people outside of the recruitment team—people from the engineering or the product divisions—were the same, if they had the same mindset and energy.

What made you decide to join SmartNews?

Kaz was always very upfront with me about not only the positives about working at SmartNews, but the areas in which there was still room for improvement. He kept it real, and I was impressed by his honesty. He didn’t try to oversell the company. And now that I’ve joined, I can say that this is something that we do for all of our candidates. We lay out the facts and let them decide for themselves. I respected that. 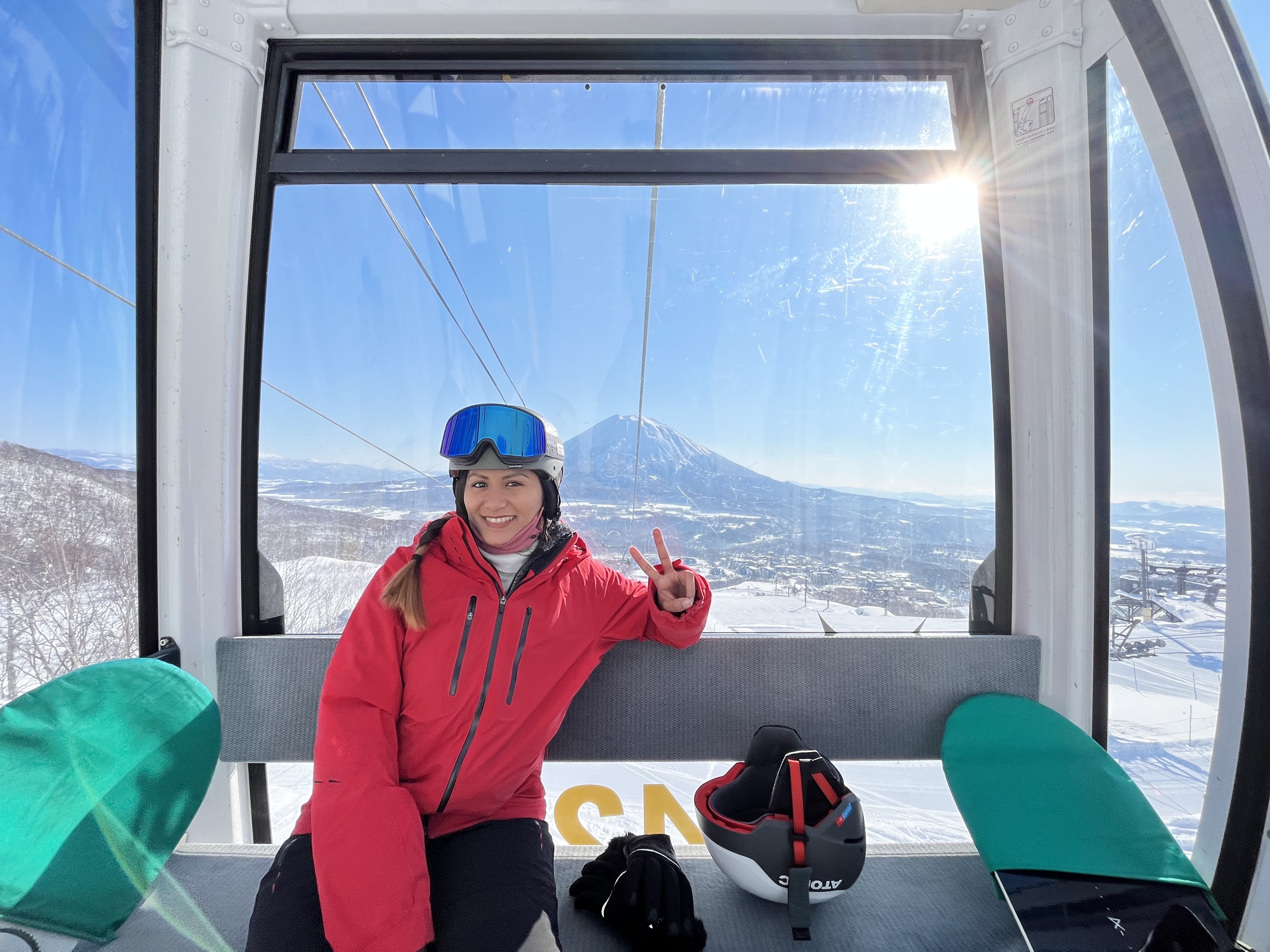 Dona on a skip trip in Niseko, Hokkaido.

How have things been for you since you started?

I think I underestimated myself going in. I had a lot of worries about if I could really do well as an internal recruiter. Could I really communicate effectively with stakeholders from different divisions and people with different roles in the company? But I think I’ve been able to live up to the expectations set out for me, and I’ve really enjoyed doing so.

One thing that I didn’t expect that has been great is that I’ve also been involved in new areas like talent organization and development. I feel like I’m getting to use all of my skills with these additional projects, such as making manuals or improving processes and then presenting the final products to stakeholders and even global partners. There’s still a lot for me to learn, but I’m happy that I’m trusted enough to be assigned to these projects. It’s a great learning curve.

My team is very capable, and we keep each other on our toes. For example, my senpai Peter isn’t shy about sharing areas where I can improve, but he also never fails to highlight my accomplishments and share them with the team. This makes me feel empowered and like I’m doing a great job, but reminds me I’m also not done improving myself.

We’re also quite a diverse team. I’m from the Philippines as I said, and I have colleagues from the US, Taiwan, and Japan. My two Japanese colleagues both spent a long time in the US, too. Everyone has very unique work and life experiences that they bring to the team. I think we work quite well because of that.

What kind of people do you think would be a good fit at SmartNews?

People that can deal with ambiguity. We are established in a lot of ways, but there are some areas that are still fairly unstructured. We adapt our best practices as the organization grows and changes, so one thing that exists today might not tomorrow. It can be difficult to navigate an environment like that, especially when you’re new and you’re not sure what the rules are. So someone who can deal with that level of ambiguity and is confident enough to trust their instincts and do what they think is right instead of holding back and waiting for permission, I think that kind of person would do well in SmartNews.

What advice would you give to someone who is applying to SmartNews?

Think about your career in terms of the experiences you’ve had, and especially what failures you’ve had. One of my favorite questions—and a question I was asked during the interview process—was, what was your biggest failure? There’re a lot of layers to that question. If done well, I think stories about failures can show someone more of who you are than stories about success. Just make sure you highlight what you learned from that experience.

A fun and relatable read on financial freedom

She’s on the Money by Victoria Devine covers everything from understanding your money story to savings, side hustles, investing, and much more. As women (and people), I think it’s important for us to have a good relationship with money so we can make good financial decisions without necessarily sacrificing the things we love. Personally, some of my guilty pleasures are traveling and brunch!

What I really enjoyed about this book was that it was both relatable and fun to read. Whether we’re in a booming economy or dealing with a pandemic or looming recession, I think it’s important to be aware of our money values and feel empowered as we work towards our goals in life. After all, it is short, so we should make the most out of it!