Megumi Yoshinaga, a Silicon Valley-based serial entrepreneur, brings a rich, multicultural background to her role in the CEO’s Office and Global Communications Division at SmartNews. Her previous experience includes co-founding the short video app Firework after completing her Master’s Degree from Stanford University.

I understand that you had a very international upbringing. Could you tell me more about that?

I often tell people that I was born borderless and grew up in the margin. Before returning to Japan in 2020, I had spent the first third of my life in China, the next in Japan, and then the US.

I am a Japanese national with Chinese heritage. At that time, my parents were really busy working in Japan, so they decided to send me back to live with my grandparents in China to attend elementary school. When I was fourteen, my parents decided that things had settled down enough so we could live together. I lived in Japan until I graduated from college.

Did you study Japanese in China before coming to Japan?

Oh! That must have been very challenging for you.

Yes, very challenging. I was in a local school where all the classes were taught in Chinese, so I had no cultural connection with Japan other than the fact that my parents lived there. When I came to Japan, I quickly realized that I needed to learn not only Japanese from scratch but also the way of making friends in Japan. There was a lot of culture shock, but I did enjoy my time in Japan.

Considering that you lived in three different countries during your formative years, what kind of influence did this have on what you thought you wanted to do when you grew up?

One fun fact about me: I was a child actress in China. I was scouted by a talent agency when I was four and worked until I was fourteen, so my first dream was to become an actress in China. This is another reason why moving to Japan was such an eye-opening experience for me. I had considered all of my strengths to be related to language and communication, so it felt like I was reborn coming to Japan because, suddenly, the things I had been good at didn’t apply. I was very lost when at first and didn’t really know what I wanted to do. I was just trying to catch up with the language and culture.

But I experienced a life-changing event in college. Besides Japanese, I wanted to learn even more languages and cultures. I majored in international politics and economics and minored in Arabic. After a year of study, I decided to go on a solo backpacking trip to the Middle East. My parents were against this idea, but I was rebellious back then—maybe I still am (laughs)—and decided to take the trip anyway. Unfortunately, the Arab Spring began while I was there. I had no idea it was coming, and as a single female, it was a really challenging time to be traveling, to say the least. My first stop was Amman, the capital city of Jordan, where I saw a lot of protests. It didn’t seem safe, and I spent the first night in a Mcdonald’s as it was the only place open twenty-four hours.

When I returned to Japan a month later, I was shocked by the reaction of some Japanese friends when they saw pictures of my Middle Eastern friends. They asked, “why did you take photos with terrorists?” I realized the impact of negative images towards Muslims post-9/11. I decided to do something about it.

I thought it wouldn’t be enough to just hold a panel discussion on this issue or preach how great Middle Eastern cultures are. I wanted to show everyone, to let people feel it. So, I decided to utilize my interest in fashion to organize Japan’s first-ever Arabian fashion show. This involved fundraising, reaching out to embassies, and even negotiating for a venue in Tokyo’s upscale Ginza district.

Luckily, the show was a blast. More than a thousand people attended, and we received plenty of media coverage in Japan. That was my first experience starting something from zero to one: fundraising, building a team, and delivering value with passion to the target audience. 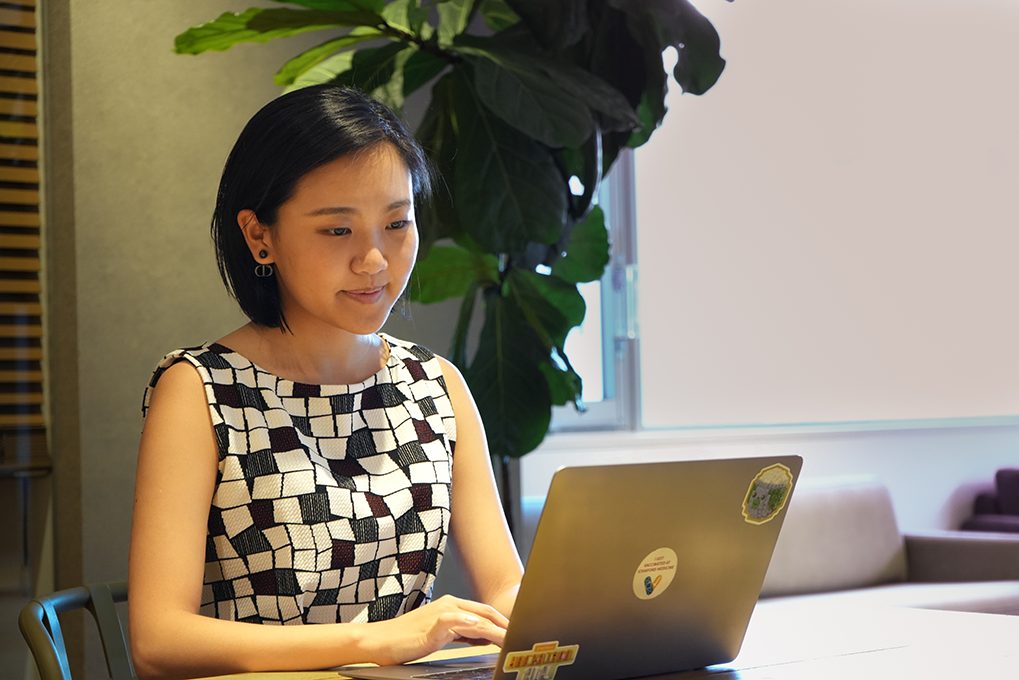 Is this what got you into becoming an entrepreneur?

Yes, I think the Arabic fashion show was my start. Back then, I was managing seventy team members in order to make the show an annual event. One of my mentors told me, “I can understand that being a young woman trying to do something ground-breaking and unorthodox in Japan is nearly impossible. However, there is a place called Silicon Valley where there are many young female entrepreneurs like yourself and an ecosystem of investors to support you.” That’s why I decided to move to Silicon Valley after graduation. I wanted to try entrepreneurship at scale.

I started applying to grad schools so I could get a student visa to the US. Luckily, I got into Stanford University. After graduation, I met with an amazing team and co-founded a company. We created a short video app, Firework, to empower creative minds. It’s similar to TikTok, but we launched one year earlier. We started with very little money and later raised thirty-five million dollars to scale the team. Fortunately, Firework ended up with eight global offices on four continents. Investing all the time I had into this opportunity, I founded the Growth Team and grew the user base from zero to one million in just a few months. We ranked No.4 in the US App Store, following YouTube, Instagram, and Snapchat in 2018.

It sounds like you were achieving what you set out to do! I understand that in 2020, you exited Firework and returned to Japan. What was it that made you come back?

For family reasons. I realized how important family is and appreciated that everything we created in the US was thanks to the support of my family I needed to spend more time with my family to find a better balance.

How did you first hear about SmartNews?

When I was considering moving back to Japan, I happened to hear about SmartNews from a professor at Stanford. And later, I found that many of my friends were talking about using SmartNews. That’s what got me interested in this company.

How has your experience been working at SmartNews?

Fantastic! It’s given me a different perspective from my previous experience. Firework was more about the zero-to-one growth hacking: everything was focused on growth because the moment a startup stops growing, it risks losing venture capital necessary to fuel the business. As SmartNews grows into a more structured organization, you have to also think of things from a corporate or compliance perspective.

I think it’s safe to say that many companies would have been happy to hire you after you came back to Japan. What was the reason you chose SmartNews?

There are three reasons. The first is that I felt the company’s mission matched what I was trying to achieve with my Arabian fashion show: to combat stereotypes. Our CEO wants to provide access to quality information because he believes in its power to change lives. This mission made SmartNews feel like my dream job.

The second reason is that SmartNews was growing rapidly when I joined; there were only about two hundred employees, whereas now we have 4X. Honestly, I wouldn’t have left the US if not for family reasons. I felt like I had suddenly been stopped in the middle of my journey. SmartNews was at a perfect stage where I could make a meaningful contribution and bring positive change.

Lastly, SmartNews was one of the only places I could leverage my experiences in Japan, China, and the US. I supported global communications in all SmartNews’ offices in those countries.

Despite your busy schedule at SmartNews, you were still able to hold a mentor session at SXSW this year. Could you tell us about that?

SXSW was looking for entrepreneurs, especially female entrepreneurs, who could talk about global business development and the creator economy, and they approached me. I had a small RSVP-only mentor session in which I talked about the creator economy and how to scale businesses globally. Topics included how to run influencer marketing, how creators are monetizing right now, and how to make content creation more scalable. 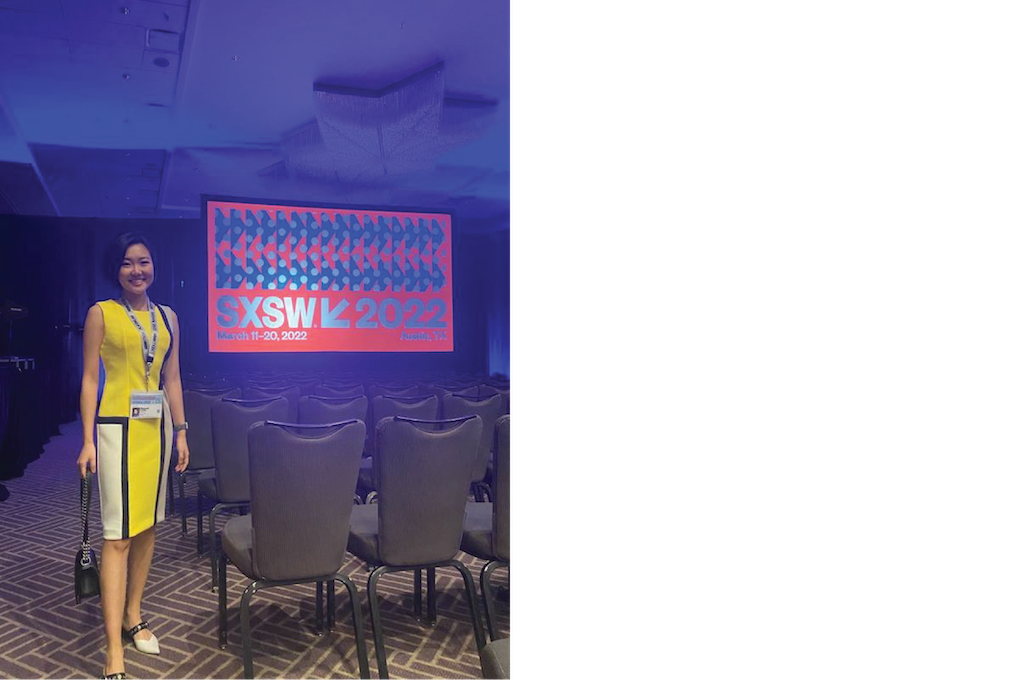 Megumi was invited to speak as the only Japanese female leader at SXSW 2022. Photo was taken in Austin, Texas.

Last question: if you could share a message with candidates considering SmartNews for their next career step, what would you want to share about SmartNews?

That’s a tough one. There are so many good things about SmartNews that I want to share: it is a place where you are allowed to be yourself and excel in the field that you want to pursue. Honestly, I think it’s a peerless environment in Japan. I have had so many opportunities in the past few years since I joined and have really enjoyed my time here.

Meanwhile, you shouldn’t think of SmartNews as just a job. Working at SmartNews is much more: we are working together to achieve a mission that will significantly impact people’s lives for years to come.

"In order to succeed, you need to go all in."

The main character in the book Demian, Emil Sinclair, is confused about the meaning of his life and seeks mentorship. In the book, there is a scene where the main character hears a story about a young man who falls in love with a star. He tried to jump off a cliff to be with the star, but just as he jumped, he thought to himself, “this is impossible,” and he fell. The person telling the story says that if he had just believed in what he was doing, he would have flown through the sky and reached the star.

When I was in junior high school, I was in a similar situation: I didn’t speak Japanese at all.  There were times I thought of going back to China and continuing to be the popular kid in school that everyone recognized from TV. It would have been so much easier. But after reading this novel, I realized that I should treat this opportunity as a one-way ticket. I wasn’t going back, at least not before achieving something in Japan. My key takeaway is if you really want to succeed, you need to go all in. Like, you have to put in 120% effort and just make it happen. The star is always there for you as long as you believe in yourself. What defines a leader is not how you rise but how you rise again after you fall.